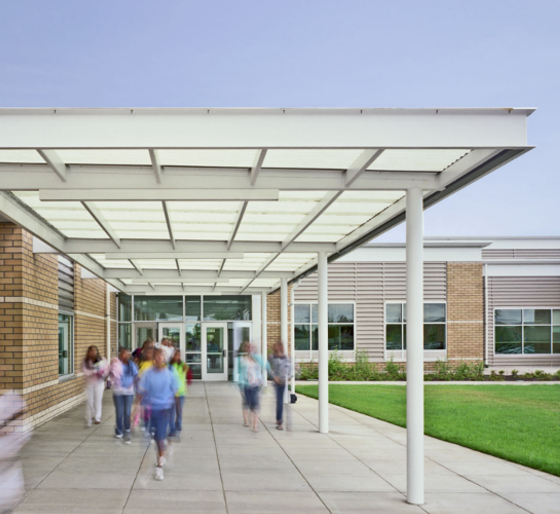 Designed to be one of the most energy efficient schools in the state, Baker Prairie Middle School (BPMS) uses natural ventilation for OA cooling and ventilation needs. Classrooms were not built with mechanical cooling systems. Initially comfort was poor, winter conditions were drafty and during the first year when OA temperature rose the classrooms became too warm. Clima-Tech stepped up and began investigating the issues. They found that installation and setup of the natural ventilation dampers was allowing excessive OA when OA was not desired. Dampers were adjusted to correct this issue. While radiant heaters were providing adequate heat for the space, a Clima-Tech technician found that the closed loop heating system was fouled and suggested that the loop be re-cleaned and treated. Eventually, to provide the heating needs of the campus, the operation of the AHUs was modified to handle the task. Without mechanical cooling a night flush logic was needed to maximize pre-cooling for the building prior to warm spring and fall days. Clima-Tech application engineers used Enterprise Integration programming that allowed the control system to gather the weather forecast data from the National Weather Service (NOAA) each night to predict cooling requirements for the next day and to adjust Night Purge pre-cooling accordingly to maximize the mass effect of the pre-cooled building. Classrooms conditions on an 85° day maintained in the low to mid 70s at 3 PM with the exception of four classrooms on the second floor east side which reached 77° (degrees farenheit).

In 2009 Baker Prairie was cited by Bob Gulick of Mazzetti, when receiving his Better Bricks Award for Design innovation, as having the lowest energy use per square foot of any middle school in Oregon.